States with the Highest Catfishing Rates – 2022

In our digital world, it’s not uncommon for people to have virtual relationships. Between social media sites and online dating platforms, it’s fairly easy to strike up a conversation with someone new. While there are many benefits to connecting with people online, it has its drawbacks as well.

In the last few years, a growing number of people have fallen victim to catfishing, a deceptive, and often costly, online con.

Records show 18,000 people were victims of catfishing, or romance fraud, in 2018, according to the FBI. Many experts believe the actual number of catfishing cases is much higher, but many people don’t report it out of embarrassment.

Aside from being deceptive and embarrassing, catfishing results in the biggest financial losses to victims compared to other online crimes. Reported losses in 2018 exceeded $362 million, which is 70% higher than it was the previous year, according to the FBI.

BestVPN wants to know just how prevalent catfish is and which states are hardest hit. By collecting and computing years of state-by-state catfishing data from the FBI database, we are able to reveal stunning data on the state of catfishing.

Quick Navigation
What is catfishing?
What methods are used?
Which states have the highest number of catfishing cases?
What’s the most dangerous catfishing state?
What state is catfishing least likely to happen?
Tips to avoid being catfished
Wrap up
Methodology

Before we dive into the data, let’s define catfishing.

Catfishing is the act of deceiving someone online. A “catfish” assumes a fake identity, starts an online relationship with someone, and gains their trust. With trust established, the catfish usually sets a trap that swindles people out of money.

What methods are used?

One of the most common ways for catfishing to take place is through a dating app. The con artists sets up a fake profile, befriends someone on the site, and starts a conversation. Scammers are talented. They say the right things, ask questions, and take an interest in a person’s life. Once the relationship “feels real,” the con artist starts asking for money.

For instance, the scammer might make plans to meet their new love, but suddenly can’t afford the trip and ask for money. Often, the money is taken, but the con artist comes up with a reason for not coming, like getting arrested or dealing with a family emergency. That prompts another request for money.

Another ploy is to ask newly-found friends to be part of a lucrative business deal or investment. The requests will continue until the victim says no.

A catfish could be conning multiple people at one time, and requesting money from all of them. 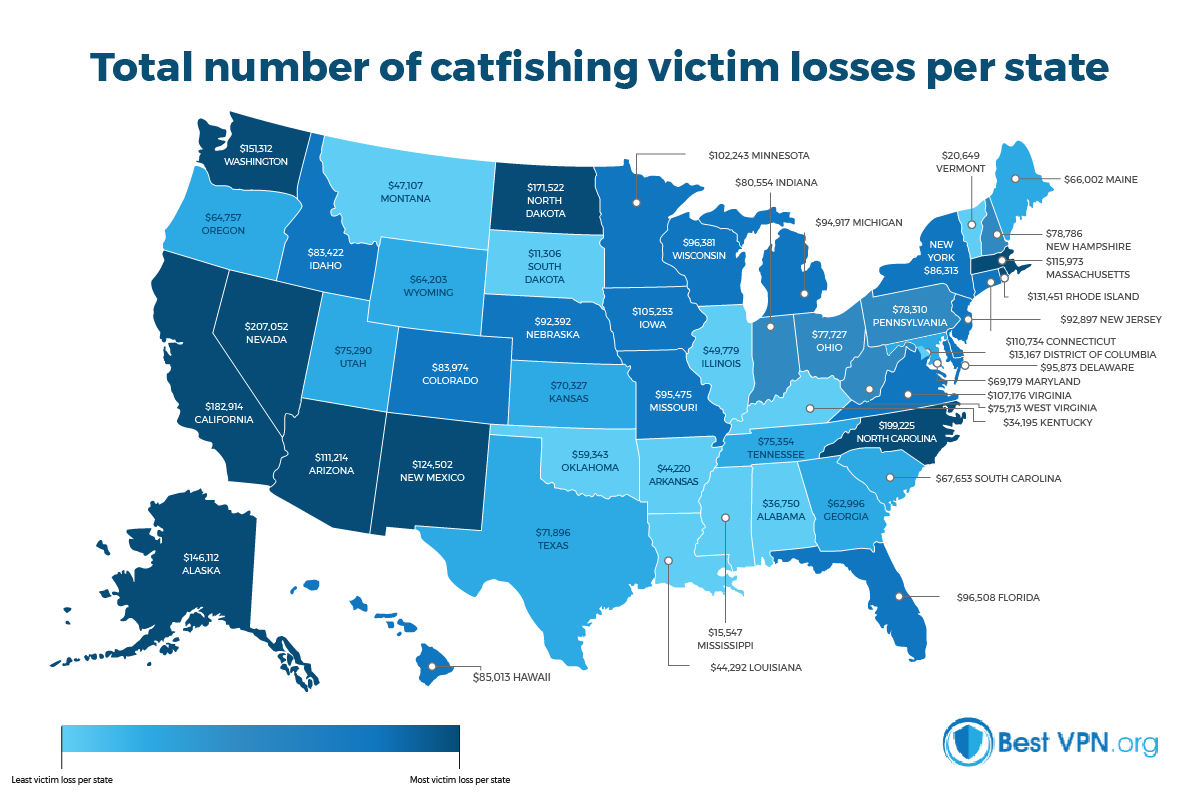 Which states have the highest number of catfishing cases?

The number of reported catfishing cases varies across the U.S. Data from the FBI’s Internet Crime Complaint Center shows several states with more than 1,000 reported cases of catfishing.

Texas has the highest number of reported cases, with 1,238 cases on the books. Florida is also north of 1,000 cases, sitting at 1,191. New York, Pennsylvania, and Washington round out the top five states with the highest reported cases of catfishing.

The state with the fewest catfishing cases is Vermont, with just 25 reported cases in 2018. South Dakota, Wyoming, North Dakota, and District of Columbia, all have 36 cases or less.

Wondering where your state ranks? Here’s a look at the number of cases reported in each state.

What’s the most dangerous catfishing state?

While Texas has the highest number of reported catfishing cases, that number alone doesn’t take into account the state’s population, how much money is typically lost per scam, and how prevalent the problem has been in the last two years.

With those factors in mind, BestVPN crunched the numbers and created a ranking.

The results show Alaska is the most dangerous catfishing state.

Alaska has the highest number of catfished victims per capita, at 11.5. Plus, residents of The Last Frontier lost $1 million in 2018 to catfishing scams.

Nevada, Wisconsin, Washington, California round out the top five most dangerous states for catfishing, according to our rankings.

Catfishing happens regardless of borders, but our research shows that some states are more prone to this online deception than others. The heatmap below represents our rankings, showing the most dangerous states in (dark blue) and the least dangerous in (light blue). 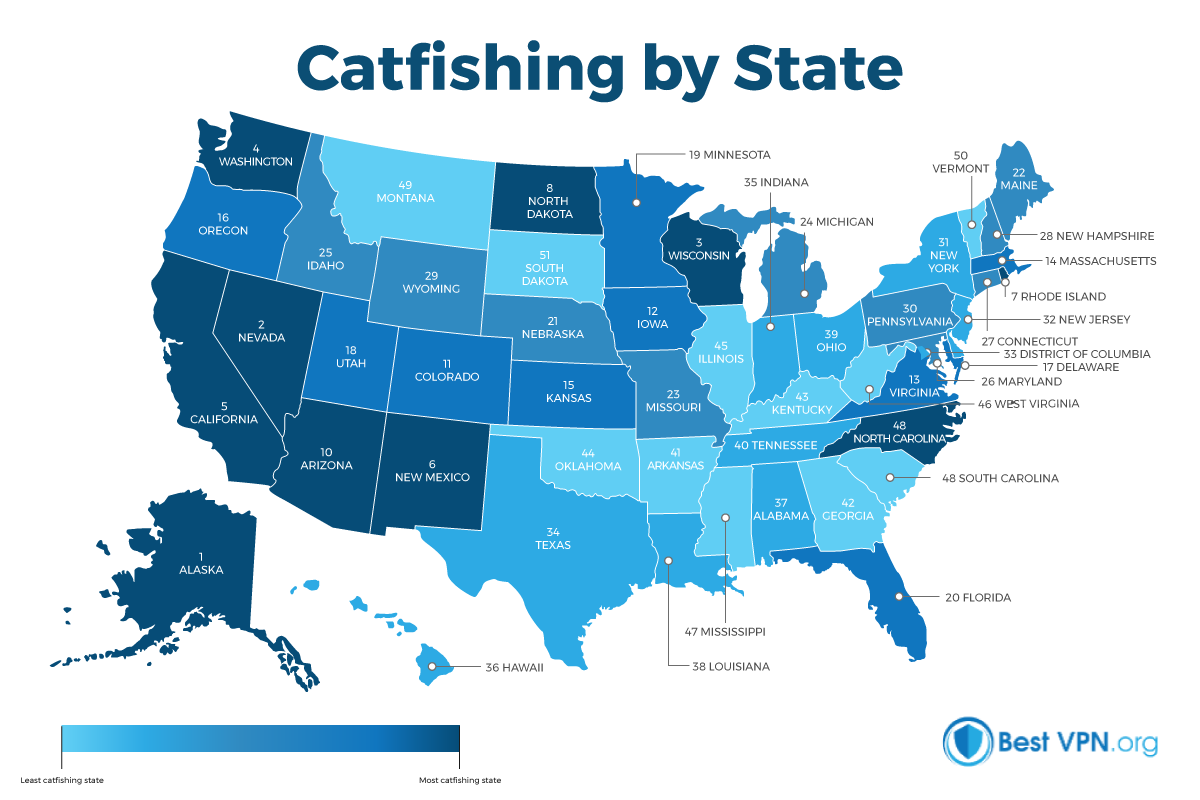 What state is catfishing least likely to happen?

Residents in Vermont and South Dakota are the least likely to fall prey to catfishing. It ranks at the bottom on our list, with the number of catfishing victims per capita at 0.06 in both states.

The smallest losses from catfishing occurs in these states as well. Catfishing cost Vermont residents just under $100,000 in 2018, and residents of South Dakota lost about $130,000 in the same year. While that’s still a significant amount of money, it’s drastically lower than Alaska’s $1 million+ loss in 2018.

Montana, South Carolina, and Mississippi, are also quite safe. 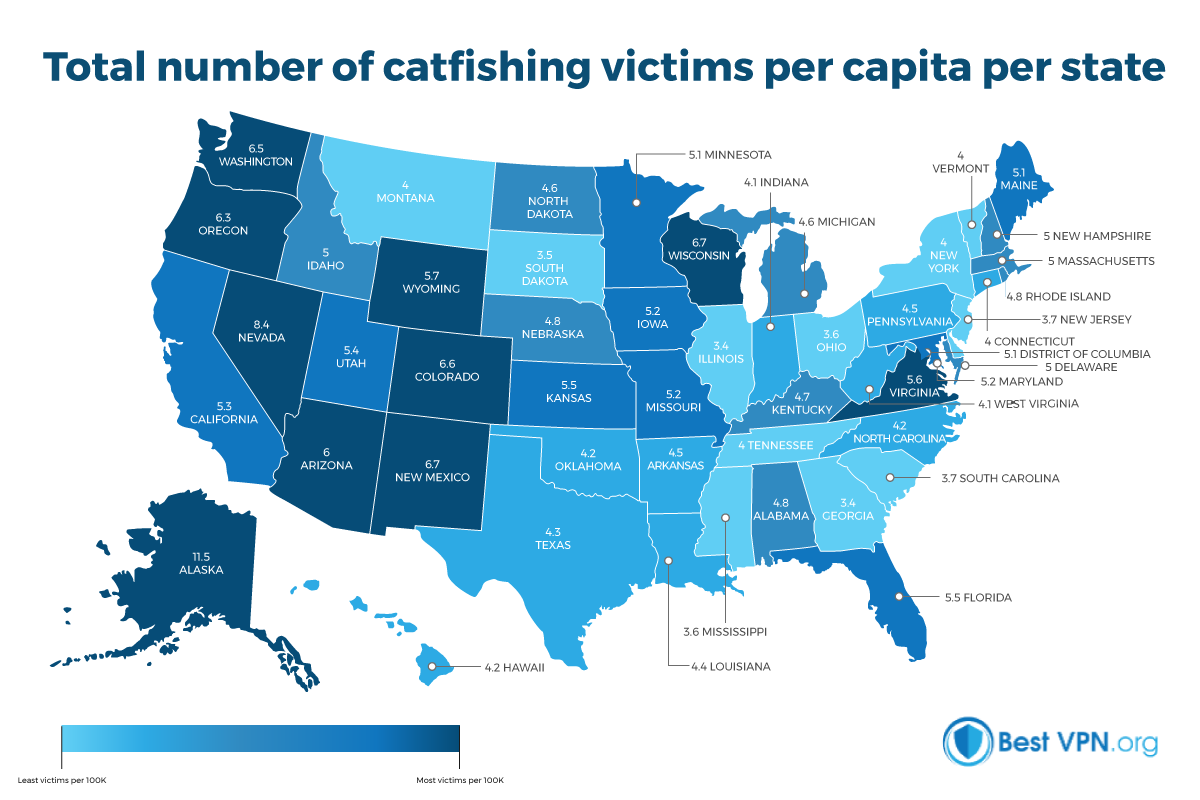 Tips to avoid being catfished

Whether you live in a highly catfished state or not, everyone should take precautions online, especially when using online dating sites. To stay safe online, here are some tips to follow:

No matter what the circumstance, don’t ever send someone money to someone you’ve met online. If you do send money, and realize after the fact that you’ve been scammed, it’s highly unlikely that you’ll ever get your money back.

There are certain things you should never reveal about yourself. For example, sensitive information that could make you a victim of a crime, like your bank account number, credit card number, or social security number should never be shared.

In addition, you should never open a bank account for someone either.

To add an extra layer of security, consider using a VPN, or virtual private network, while you’re online. It creates a secure connection, keeps your browsing history private, can mask your location, and helps prevent crimes like identity theft.

When you meet someone online, Google their name and see what comes up. You should also run a reverse search on their profile picture to make sure the picture isn’t attached to several different identities.

Scammers know that dating sites track conversations, so they often ask to move the conversation to another platform. They might ask for your phone number to text, for example. If you’re asked to chat on your personal cell phone immediately, there’s probably a reason.

Catfishers tend to use the same deceptive themes. As you connect with people online, be on the lookout for people who say they’re from the U.S., but currently live or work overseas. Scammers might say they’re in the military serving abroad since this position instantly evokes a sense of respect and trust. In time, they have some sort of financial crisis that requires your help.

Catfishing is a threat to anyone communicating online. It’s important to understand what catfishing is and which states are dangerous. Catfishing is rampant in Alaska, according to our rankings, but no matter where a person resides, taking safety precautions online should be a priority.

BestVPN.org collected the most recent Internet crime complaints from the FBI's UCR Crime website (for the years 2017 and 2018). Of the various crime complaints, Romance Fraud type complaints were normalized with state populations (for 2018) to get the totals per 100,000 and the overall state safety score.