Hi, I'm Alex and I'm a location-independent ("digital nomad") product manager. I travel a lot – at least one country a month – so finding a VPN for things like Netflix (Cheers reruns), secure online banking, and anonymity is important.

Since I've used and tested so many VPNs, I figured I'd share what I've learned: which VPNs actually work and which VPNs don't make the cut.

I also wrote an extensive guide Blogger's Guide to WordPress Security – check it out! 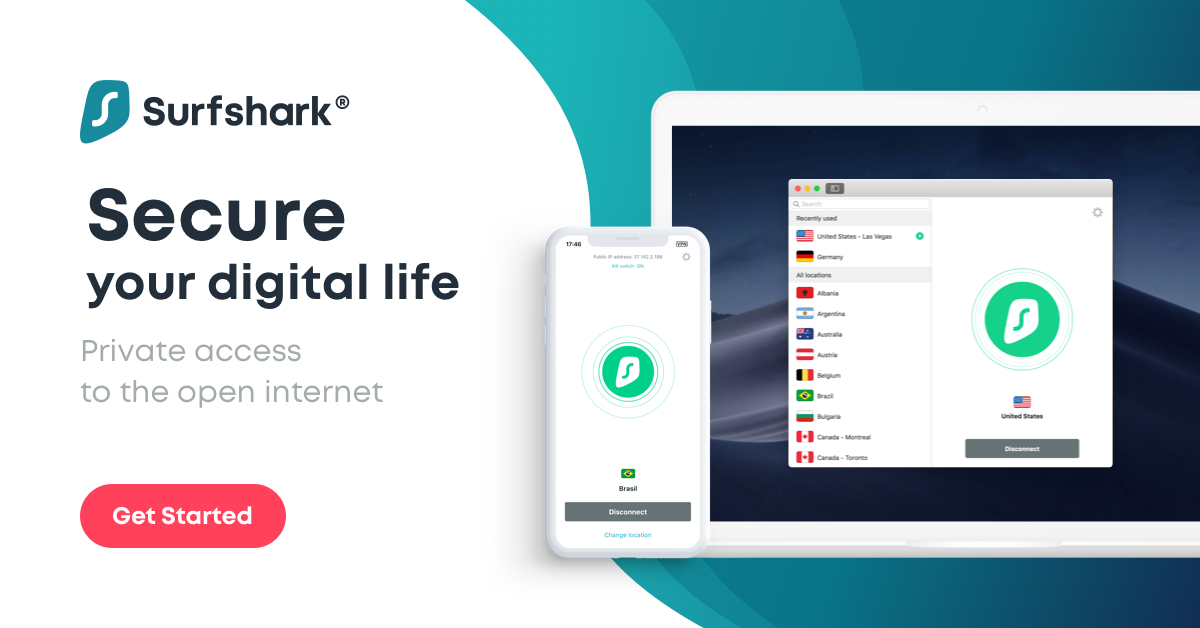 VPNs: What They Are and How They Work

Why use a VPN?

There are many reasons to use a VPN beyond the cybersecurity benefits. In addition to anonymizing your internet activity and increasing your online privacy, a VPN can be used to:

Although web destinations cannot see your true IP address, your internet service provider will be able to see packets flowing from your computer to the VPN server. While they may not be able to see the exact content of these packets, they can make broad conclusions about the kind of data that is being transferred, whether it be streaming video, visiting web pages, or torrenting files. Yet, they can’t do much with this kind of basic presumptive data.

However, even with a VPN, you are vulnerable to HTTP cookies when you visit websites, regardless of whether or not your IP address is masked. The same goes for malware and computer viruses.

So, even though a VPN protects you against surveillance, it's nevertheless important to be vigilant about the types of websites you visit and files you download. Always use effective anti-virus software in addition to a VPN, and download the latest updates for your operating system.

The average cost of a VPN

Here’s what they average prices come out to:

As you can see, across the board, those that opt to pay for a year’s service in advance experience a significant average discount of 45%. Some of the top VPN providers, like NordVPN (3 years: $3.49 a month), Cyberghost (3 years: $2.75 a month) and Surfshark (2 years: $2.49 a month) offer even more substantial discounts when you commit to a 2 or 3 year subscription term. The advantages of paying for a longer term subscription upfront are obvious.

However, the issue is that you don’t truly know whether you’ll be satisfied with a VPN until you try it, making the hesitance to make a long term commitment understandable. Thankfully, most of the major VPN services offer 30-day money-back guarantees that are virtually free of predatory conditions and fine print, allowing you to try a VPN for an extended period free-of-risk.

While a VPN is no doubt a vital cybersecurity tool, the rise in VPN use means that there is a glut of VPN service providers on the market, making it difficult to choose the right one. While the service and protections they offer are similar, not all VPNs are created equal: some offer faster speeds, while others have much stricter no-logging policies. Additionally, a number of VPN companies don’t allow P2P file sharing, making them not much better than your internet service provider.

With these concerns in mind, we’ve reviewed the 10 best VPN services available in 2020. These VPNs distinguish themselves from the pack with affordable prices, unique features, and excellent encryption standards.  Let’s take a closer look at the top VPNs available.

The best all-around VPN on the market, boasting blazing speeds, a high server count, and excellent compatibility with Netflix and other streaming services

While it’s a bit pricier than many of its competitors, few VPNs offer as much value for your money as ExpressVPN. The industry leader offers military-grade AES-256 encryption, DNS leak protection, an internet kill switch function, and has thousands of virtual servers based in 94 countries around the globe. What’s more, ExpressVPN’s 24/7 live chat support is the best around.

To top it off, ExpressVPN is the top VPN for unblocking regionally-restricted Netflix content and is the VPN of choice for those living in China or Iran, where popular sites like Facebook and Google are locked behind a firewall.

If price is not a concern for you, then ExpressVPN is the top pick for a VPN in 2020. The service supports payment with credit card, PayPal, Bitcoin, and more.

With a massive number of servers, state-of-the-art security, and an affordable pricing model, NordVPN is a force to be reckoned with

If ExpressVPN is the industry standard-bearer, then NordVPN is a worthy competitor, besting its rival in server count and affordability. NordVPN’s 5700+ servers in over 80 locations mean that you’ll always be able to log in, no matter where you are. The service is unmatched in affordability vs. server count, offering a 3-year plan that comes to just $3.49 a month.

Although NordVPN suffered a high-profile hacking in 2018, the company has addressed the issues and now boasts some of the industry’s best security, including AES 256-bit encryption, kill switch features, DNS leak protection, and a strong no-logging policy. NordVPN also performed excellently in our speed tests, earning well-above-average download and upload speeds.

Surfshark is a solid, P2P-friendly VPN with great security and an app interface that’s perfect for casual users. While the British Virgin Islands-based company doesn’t offer the dazzlingly-high server count as some of the bigger names, you can always count on fast connection speeds and a reliable connection. Novices will prefer the app, which isn’t bogged down in features and options, instead presenting two main choices: ‘All locations’ and ‘Quick Connect’, along with a ‘Settings’ menu.

Surfshark’s security is top-notch: the service offers AES bit encryption, IKEv2 security protocols, a kill switch feature, and a strict no-logging policy. Also of note is that Surfshark allows an unlimited number of device connections at a given time, compared to an average of around five for competing services. All in all, a worthy and affordable VPN choice.

A formidable VPN with a high server count and excellent customizability

Although server count isn’t everything, Cyberghost’s nearly 6500 servers in 111 countries is very impressive, and all of them feature an optical fiber internet connection with no data caps. Cyberghost’s apps for desktop and mobile are feature-rich: they allow you to block trackers, malware, and ads or automatically connect to the ideal server for a regionally-blocked service like Netflix or BBC iPlayer. The service also offers high-end 256-bit encryption, no-logging, and automated HTTPS redirection.

Cyberghost also shines in its value, offering a 45-day money-back guarantee and an unrivaled 3-year plan that comes to just $2.75 a month.

IPVanish is a top-notch VPN with over 40,000 shared IPs, servers in over 70 countries, support for 10 simultaneous connections, and unlimited P2P data transferring. The service’s 24/7 customer support is great, and unlike other VPN providers, you can access it straight from your phone or mobile device.

In terms of speeds, IPVanish is solid, if not the best, but the service does offer unlimited torrenting on every server and works with Netflix, Hulu, and BBC iPlayer. Minor downsides include IPVanish’s slightly expensive pricing and lack of support for payment with Bitcoin.

Hot Spot Shield is a quality VPN that shines in its speeds, earning the title of the “World’s Fastest VPN” from Ookla’s Speedtest.net. In fact, Hotspot Shield rated 1.8x faster than ExpressVPN in local performance.

Not only is it fast, but HotSpot Shield also boasts great security, with AES-256 encryption, and allows unlimited torrenting. However, there are some drawbacks, such as the lack of support for OpenVPN and no Bitcoin payment option.

Although Hotspot Shield does offer a free version, most people will prefer Hot Spot Shield Premium, which features unlimited bandwidth and has no ads.

PureVPN has a lot going for it: a ton of servers around the world, support for many platforms, and the ability to unblock Netflix, Hulu and Disney+. The Hong Kong-based service has been in the business since 2007, and it shows: PureVPN’s security features are impressive and include DNS leak protection, a smart kill switch feature, and split tunneling.

Although there have been questions about the company’s no-logging policy, the company claims it does not keep activity logs, and the service’s 31-day money back guarantee allows you to cancel if you aren’t satisfied. Overall, PureVPN does a lot to distinguish itself as a great VPN for the price, and even allows payment with Bitcoin.

Although Canadian-based TunnelBear doesn’t boast flashy server numbers or an app with a long list of features, the VPN is a trusted and reliable option. In fact, Tunnelbear is the only VPN that allows regular independent security audits and posts them on their website. It’s no surprise that the VPN elicits glowing feedback from its many users.

TunnelBear has a strict no-logs policy, great download speeds, and high-end encryption, but what really sets it apart is its ease-of-use: the desktop and mobile VPN apps have a cute, Super Mario-esque world map interface, and leave out technical features that could confuse most novice users. However, the low server count is notable, and the customer service is somewhat lacking.

Swiss-based ProtonVPN is a one-of-a-kind VPN service provider that offers four levels of service at four different price points, starting with the free VPN which allows for 1 device to connect to servers in 3 countries at medium speeds. While that won’t cut it for most, it’s sufficient for bypassing geo-restrictions, and is one of the few free VPN services worth using.

The two higher-end plans offer more servers, P2P support, top-end encryption, and routes internet traffic through the famed Tor anonymity network. Additionally, you get access to ProtonMail, the world’s largest encrypted email service. Although ProtonVPN doesn’t offer the largest number of servers compared to some competitors, its exclusive features and pricing model separate it from the pack.

An affordable, publicly-audited VPN with top-end encryption and first-party hardware

VyprVPN is a Switzerland-based VPN that hits all the marks, boasting unlimited bandwidth, wide platform support, fast speeds, AES 256-bit encryption, and DNS leak protection. There’s also a kill switch feature that automatically shuts off your connection if the VPN connection is broken.

Although it doesn’t have servers in the thousands, VyprVPN performed great on speed tests and its proprietary Chameleon VPN protocol allows users to bypass stringent VPN-blocking attempts. Due to its affordable pricing, wide-ranging platform support, and first-party hardware usage, VyprVPN is a fine VPN that deserves serious consideration.