Online Shopping Scams Are 62% Higher During the Holiday Season; California and Texas Are the Hardest Hit

For the first time, consumers will do more of their holiday shopping online than they will in brick-and-mortar stores. Fifty-four percent of shoppers plan to do their shopping from their mobile devices this year, as opposed to in-store.

This year marks the first time the shopping scales will tip in favor of online consumerism, according to research from PricewaterhouseCoopers LLP.

While more people plan to shop online this year, there’s a real threat that consumers have to watch out for: online shopping scams.

BestVPN.org compiled data and read hundreds of consumer reports to investigate just how prevalent online shopping scams are, and the results are shocking.

Online shopping scams are 62% higher during the month of December than they are during an average month.

Scams are a problem for residents across the country, but our research revealed several states – California and Texas – are the hardest hit by digital scammers.

Online shopping scams happen year-round, but they’re more prevalent during the holiday season. This year, consumers should be aware of potential scams as they shop for holiday gifts online. No matter how a scammer pulls it off, every case can result in lost money.

For protection against holiday scams, shoppers must take precautionary steps this season. Be cautious about ordering products from unknown websites, buying products that are priced extremely low, or purchasing a product that you learned about via an email from an unknown company.

What kinds of scams are most popular?

Consumers pay for an item, but never get it

The most common online shopping scam happens when a consumer buys something from a website, pays for it online, but never gets the item. Consumers usually inquire about the item only to find that the company’s phone number is disconnected, the address is fake, or the website is no longer online.  Money is never returned.

Consumers buy an item, but are told it ran out of stock

In some cases, consumers buy an item during a flash sale, but later received an email that says the product is so popular that the company ran out of inventory. The company apologizes for the inconvenience and tells consumers that they’ll refund their money within 24-48 hours, but the money is never returned.

Consumers wire a deposit for a foreign item, but get nothing

There are several cases where consumers bought something abroad, either because the product was such a great deal or because it’s not something that’s typically sold in the U.S. In these cases, scammers asked consumers to pay a deposit for the item upfront and then let the consumer pay the rest upon delivery. However, consumers never got the product and don’t get their deposit back either.

Most of the online shopping scams were initiated through an email. Shoppers received a message about a great product with a low price and that sent them to a specific website where the scam took place.

In other cases, consumers stumbled upon the site by themselves while searching for holiday items. Websites run by scammers look legitimate, and even mimic the look and feel of other well-known retailers in an effort to lure you in.

Online shopping scams throughout the year

Now that you understand what kinds of scams were talking about, and how scammers are reaching shoppers, let’s look at the number of scams that were reported in the U.S. in 2018.

A look at the monthly breakdown of online scams shows the drastic spike in online shopping scams during December. 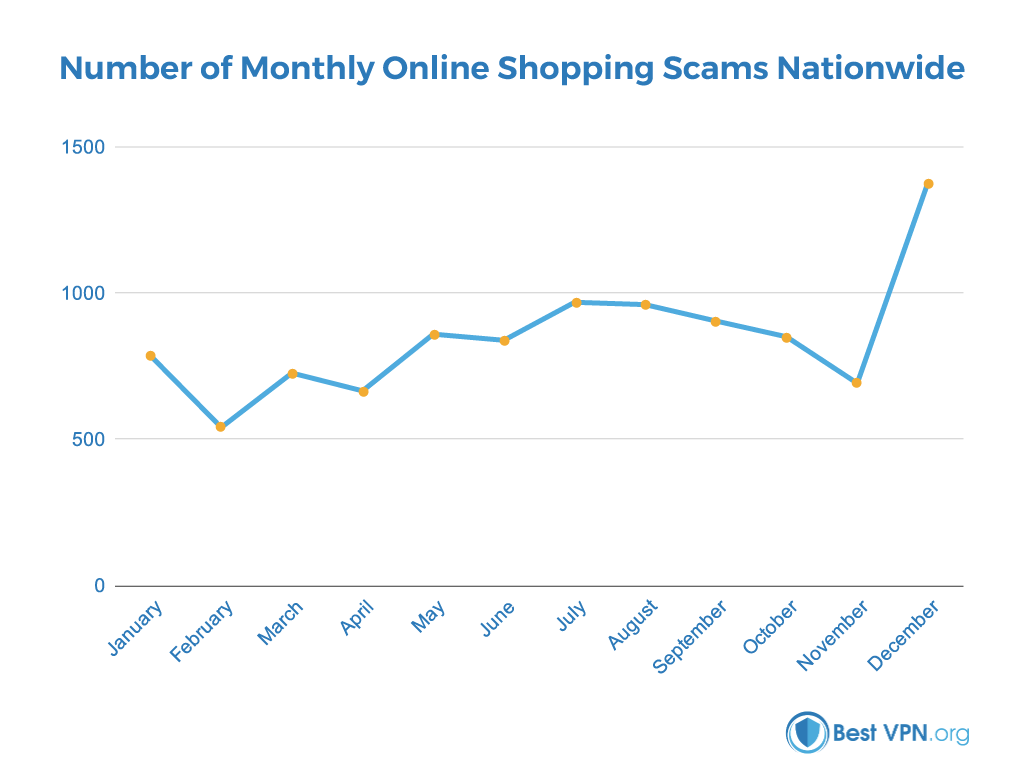 We pulled data for every state and looked specifically at the number of reported online shopping scams that took place in 2018 during the last month of the year. 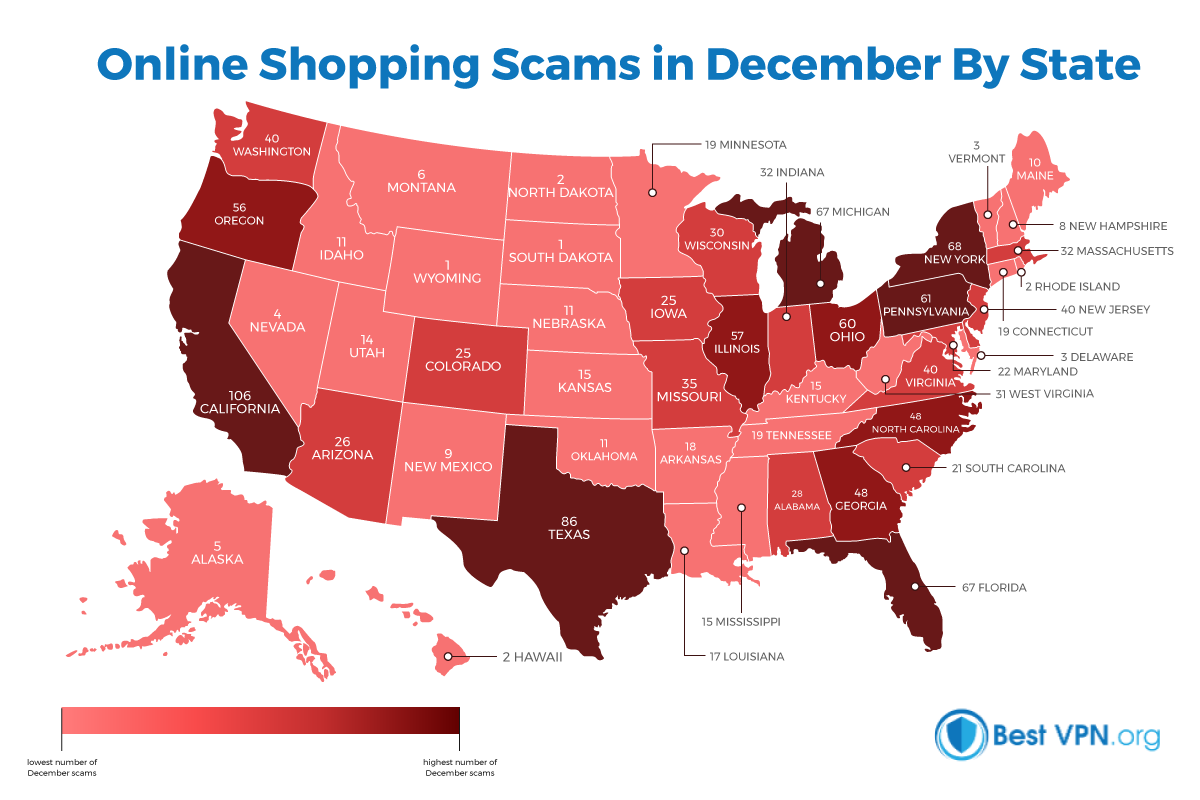 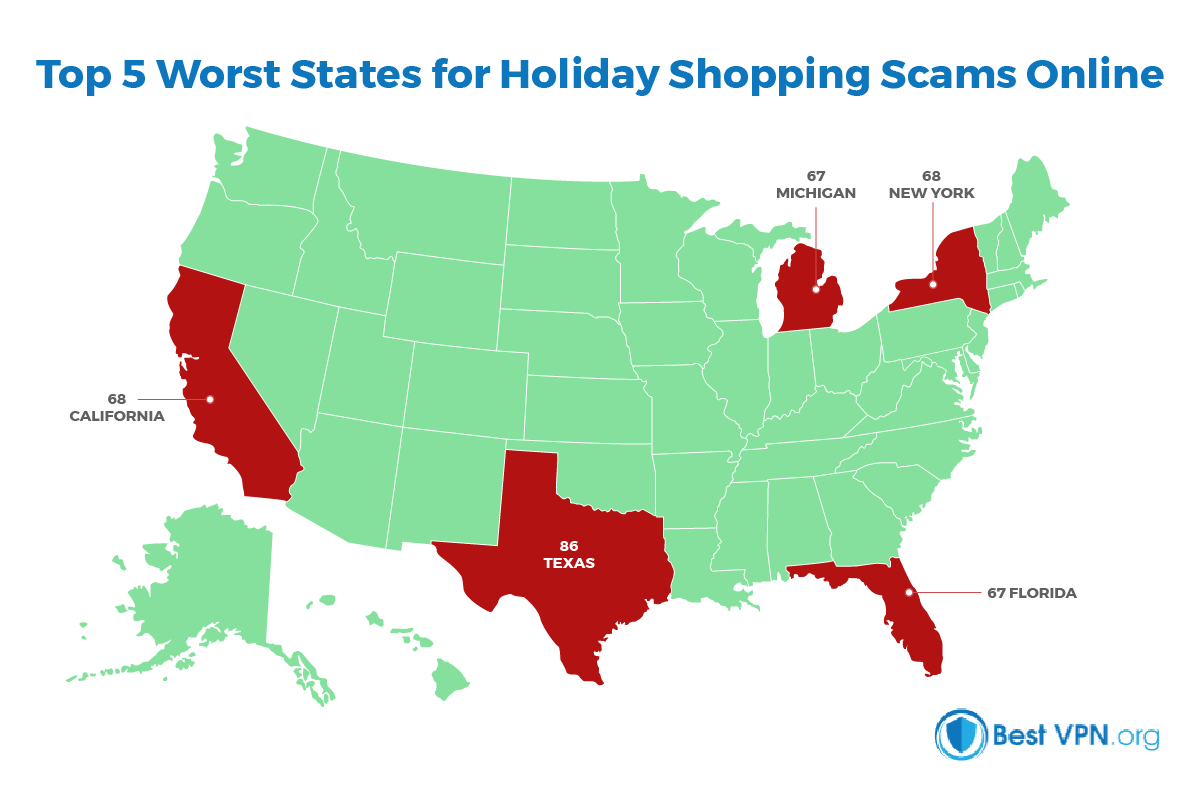 We were also able to find the states with the lowest number of reported scams from online shopping. Surprisingly, there were a handful of states that only had one or two cases of online shopping scams reported.

The states with the least holiday shopping scams are Wyoming and South Dakota. In both of these states, there’s only one reported online shopping scam in the month of December. Three other states only had two reported cases in December. 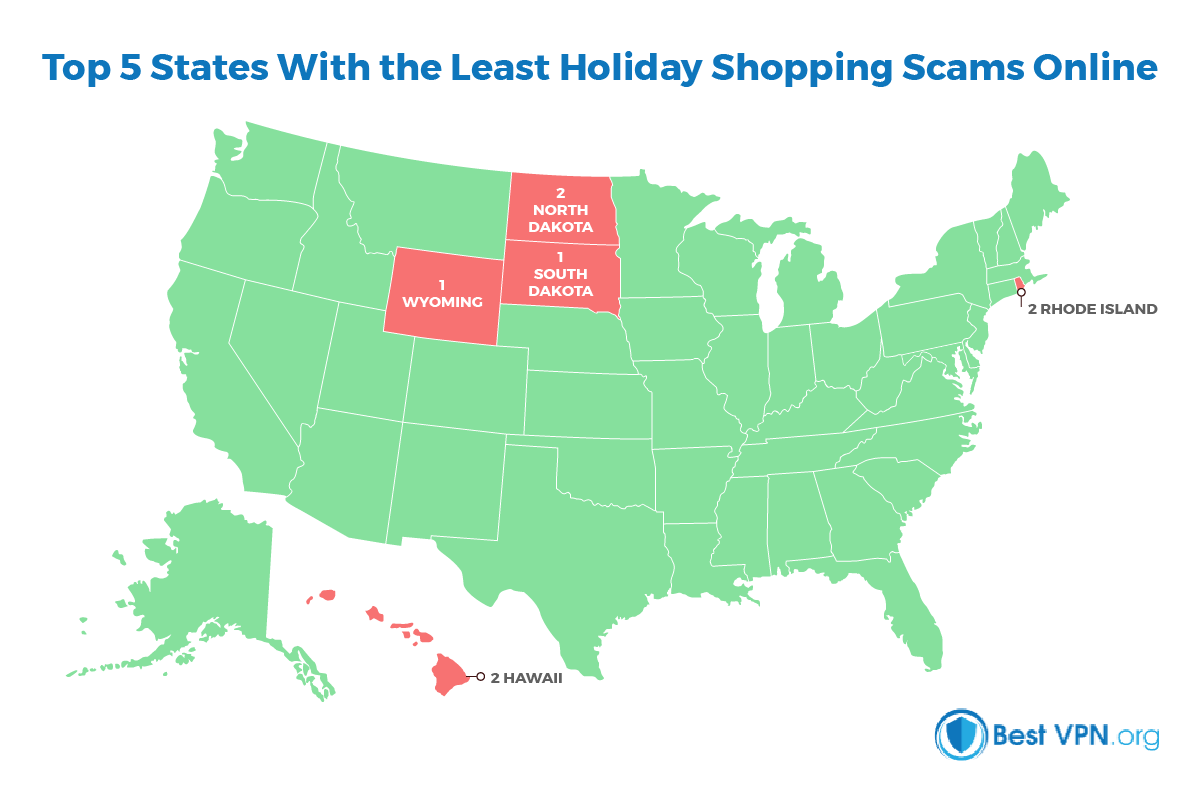 To help consumers stay safe while shopping online this season, here are tips to follow:

Public Wi-Fi connections can be hacked, which gives scammers easy access to personal data. Add a layer of protection by using a mobile VPN, or a virtual private network, to maintain online privacy and anonymity.

During the holidays, stick to popular sites for shopping. If a new site is a must, read reviews online, look for the company’s physical address on their website and run it through Google Maps to make sure it exists. Read the ‘About Us’ section to validate the company’s validity, and call the company’s phone number to make sure a real person answers.

Check grammar and language use in emails

Consumers should read promotional emails carefully. If an email has grammatical errors or doesn’t seem like it was written by someone who really knows the language, it’s a red flag. Emails written by scammers overseas often have misspellings, grammatical errors, or don’t use words in the right context. These emails could be phishing scams used to steal a consumer’s identity.

Consumers shouldn’t make any purchases from sites that don’t have ‘http’ in the beginning. Sites with URLs that start with different letters are likely fraudulent.

If someone calls out of the blue asking for personal details, it’s cause for concern. If the contact wasn’t initiated by you, be wary of any information you give.